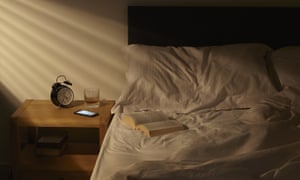 Mental health problems including psychotic experiences could in part be down to a lack of sleep, researchers have revealed.

A new study found that people who had undertaken a course of cognitive behavioural therapy (CBT) designed specifically to treat insomnia not only found their sleep improved, but also experienced reduced paranoia and fewer hallucinations – both psychotic experiences – as well as improvements in depression and anxiety.

“The dominant view is that sleep [problems are] either a symptom of several mental health problems or it is a secondary consequence,” said Daniel Freeman, co-author of the research from the University of Oxford. “Really, sleep is one of the contributing causes.”

Writing in the journal Lancet Psychiatry, a team of researchers from institutions across the UK describe how they examined the link between sleep and mental health using online surveys to quiz students from 26 universities up and down the country. Individuals were invited to take part in the study if they were found to have insomnia after answering a web-based questionnaire

In total more than 3,700 students signed up to the study, with participants randomly split between two groups – those who were offered an online course of six 20-minute sessions of CBT directed at tackling insomnia, and those who received no treatment. Both groups undertook online assessments at the start of the study and after three weeks, 10 weeks and 22 weeks.

The results reveal improvements in both sleep and mental health were greater for members of the CBT group.

After taking into account effects not linked to treatment – as deduced from the no-treatment group – insomnia in the CBT group was found to have fallen by almost half 10 weeks into the study, while both anxiety and depression dropped by a fifth, and paranoia and hallucinations fell by 25% and 30% respectively.

“Having insomnia doubles your chances of developing depression and we now know that if you treat the insomnia it reduces depression,” said Freeman.

While symptoms of mania increased among those in the sleep treatment group, the team say that could actually reflect increased wellbeing, since assessments for mania probe factors such as cheerfulness and self-confidence.

However the authors admit that the drop out rate was high at about 50%, with just 18% of those in the treatment group accessing all six CBT sessions. But, they add, a number of different scenarios were considered for those who quit the study, including that their mental health issues continued to change in line with those who remained in the study, or that they became worse, with all scenarios giving rise to the same conclusions.

“It is very clear that even despite there being a lot of drop-out, you can still see the pattern emerge,” said Freeman, adding that the study also underlined the link between sleep and mental health was two-way, with psychotic experiences affecting sleep – albeit to a smaller degree.

While most participants did not have clinically diagnosed mental health disorders, the team say they believe insomnia is also likely to be a contributing factor for severe psychological problems.

“The realistic view of mental health problems is that there is a spectrum of severity and all the evidence we have is that the causes and the treatments are similar across the spectrum,” said Freeman.

The upshot, he says, is that insomnia-focused CBT programmes could do much more than help individuals sleep.

“There is good news here: [insomnia] is something that can be treated, and not only does the distressing sleep problem itself improve, but there are knock-on benefits to a number of areas of your psychological health,” said Freeman, adding that with little social stigma attached to insomnia, focusing on sleep problems could offer young people a way in to discussing mental health problems.

Ian Hamilton, a lecturer in mental health at York University who was not involved in the study, cautioned that the research relied on self-selection of participants and self-reporting in the assessments – both of which could have affected the results – and was carried out only in students.

But, he added, the research offered hope. “The important message from this research is that there is a real opportunity to help young people with insomnia and reduce their chances of developing psychotic experiences,” he said. “The challenge will be for mental health workers and services who may routinely ask [individuals] about sleep but are not usually equipped or skilled in tackling sleep issues.”

Nicole Tang, an expert in insomnia and CBT from the University of Warwick and who was not involved in the research, described the study as important. “Considering that more students than ever suffer from ill mental health, findings of this study suggest that investment in providing sleep-related interventions is a logical and possibly cost-effective way to tackle this growing problem among our young people,” she said.